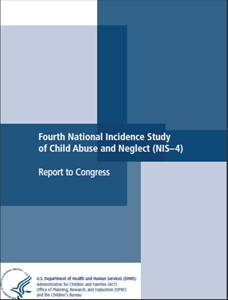 Before we jump right in to the alarming statistics regarding child maltreatment, some background on the source of the information used for this article and a definition of terms would be helpful. For purposes of the statistics cited in this report, we have utilized the Fourth National Incidence Study of Child Abuse and Neglect (NIS-4).

What is the National Incidence Study of Child Abuse?

In January 2010, a report entitled “Fourth National Incidence Study of Child Abuse and Neglect (NIS-4) was released by the U.S. Department of Health and Human Services. That report is referred to herein as NIS-4. The National Incidence Study is a periodically mandated effort of the United States Department of Health and Human Services to report on the level of child abuse and neglect in the United States. NIS-4 was mandated by Congress in 2003. Data was collected during 2005 and 2006, and the report was issued in 2010. Prior NIS reports, also mandated by Law were done in 1979 & 1980 (NIS-1), 1986 (NIS-2) and 1993 (NIS-3).

NIS-4 explains the unique nature of the report:

The NIS serves as the nation’s needs assessment on child abuse and neglect. It offers a unique perspective on the scope of the problem beyond the children that child protective service (CPS) agencies investigate. While the NIS includes children who were investigated by CPS agencies, it also obtains data on other children who were not reported to CPS or who were screened out by CPS without investigation. These additional children were recognized as maltreated by community professionals. Thus, the NIS estimates include both abused and neglected children who are in the official CPS statistics and those who are not.

The NIS accumulates reports of abuse and neglect from CPS agencies as well as other professionals, eliminates duplicates and develops statistics related to the level of abuse and/or neglect in any given year. Throughout the report, children are classified in every category of abuse and neglect that applies to their individual situation. This generally results in components which can total more than 100%.

The NIS-4 report includes two “standards” of maltreatment for purposes of classification – the “harm standard” and the “endangerment standard.” Results for maltreatment under both standards are presented below, so some clarification is merited.

The Harm Standard, as defined by NIS-4 is,

…relatively stringent in that it generally requires that an act or omission result in demonstrable harm in order to be classified as abuse or neglect. It permits exceptions in only a few specific maltreatment categories, where the nature of the maltreatment itself is so egregious that one can infer that the child was harmed. The chief advantage of the Harm Standard is its strong objectivity. Its principal disadvantage is that it is so stringent that it provides a perspective that is too narrow for many purposes, excluding even many children whom CPS substantiates or indicates as abused or neglected.

By contrast, the Endangerment Standard,

…includes all children who meet the Harm Standard but adds others as well. The central feature of the Endangerment Standard is that it counts children who were not yet harmed by abuse or neglect if a sentinel thought that the maltreatment endangered the children or if a CPS investigation substantiated or indicated their maltreatment. In addition, the Endangerment Standard is slightly more lenient than the Harm Standard in allowing a broader array of perpetrators, including adult caretakers other than parents in certain maltreatment categories and teenage caretakers as perpetrators of sexual abuse.

The NIS-4 also classified abuse based on the severity of harm suffered by the child as a result of the abuse or neglect. Definitions of severity for purposes of the report were:

Fatal: These children died as a result of the abuse or neglect they sustained.

Serious Harm: Instances classified as serious hard had to include life-threatening condition, long-term impairment, or professional treatment aimed at preventing long-term impairment. This type of harm may include unconsciousness, cessation of breathing, broken bones, chronic drug abuse, burns and other conditions.

Moderate Harm: These instances include injuries which persist in observable form for at least 48 hours. They may include bruises, depression or emotional distress which does not require professional treatment.

Inferred Harm: Under NIS standards, certain types of abuse were permitted to be associated with harm even where it was not readily observable. These would things like sexual abuse and abandonment where harm is fairly certain even where it is not observable.

Definitions of Family Structure Utilized in the Report

The NIS-4 report reports instances of child abuse by various categories. The ones we focused on for purposes of this article had to do with instance of abuse and neglect based on family structures and the living arrangements of children. For purposes of NIS-4, Children were classified as living with two parents, one parent or neither parent. The definition of parent used for the report was consistent with those used by the U.S. Census Bureau. By that definition “parent” included birth parents, adoptive parents and stepparents. For purposes of the NIS-4 report, instances of maltreatment were grouped by the child’s living arrangement into one of six categories.

Married Biological Parents: Child living with both biological parents who are married.

Other Married Parents: Child living with two married parents one or both of whom have some other legal parental relationship with the child (e.g., adoptive parents and stepparents)

Cohabiting Biological Parents: Child living with two unmarried cohabiting parents either biological or who have some other relationship with the child (e.g., adoptive parents).

Parent With Cohabiting Partner: Child living with a single parent (with any relationship to the child) with a cohabiting partner.

Single Parent, No Partner: Child living with a single parent (with any relationship to the child) without a cohabiting partner.

Neither Parent: Child living with no parent.

Based on U.S. Census Data, the NIS-4 report indicated the following numbers of estimated children living in each family structure:

Here at Divorce Ministry 4 Kids, we feel that the issue of child abuse and neglect is serious enough to warrant dedicating an entire month to. We hope that you will read all of the articles so that you, and those in your children’s ministry, will be better prepared to deal with this issue which is all too prevalent and disproportionately affects children of divorce and children from single-parent homes. The series includes the following articles:

A pdf file will be posted at the end of the series including information from all nine articles in one comprehensive, not-so-brief, but easy to use format. For those of you who have expertise in this area, or have dealt with abuse and neglect situations in the past, we hope that you will join the conversation by adding your voice to the series through comments on the articles or on our Facebook Page.