To measure the effects of family structure and religious attendance on both children and adults, Dr. Fagan and his team of researchers at the Mapping America Project analyze data from a number of large, mainly federal surveys, such as the General Social Surveys (GSS) and the National Survey of Children’s Health. What they have documented so far is that growing up with both biological parents in a family that attends church together regularly is linked to a wide array of positive life outcomes for both children and adults, ranging from personal happiness to various behaviors, such as decreased criminal involvement and drinking alcohol as adults. They have also shown that adults in intact marriages who worship regularly enjoy greater happiness, engage in more positive behaviors, and have more positive attitudes about marriage, childrearing, their work, and their fellow man, than married adults who do not worship regularly and/or adults who are divorced or separated.

The study looks at various outcomes in life based on a person’s family status and religious attendance. While the charts focused on religious attendance are fascinating and worthy of review, the focus for purposes of this article is on some of the impacts of growing up in a family without married biological parents. The Mapping America Project includes numerous potential outcomes, and we will only cover some in this article today. Specifically, today we will review the impact of being raised a child of divorce or raised in a single parent family has on various social issues.

Religious Activity of Children of Divorce 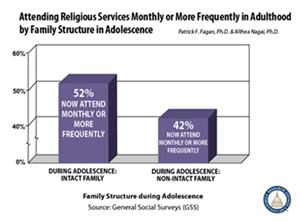 That represents a nearly 25% better chance that someone will regularly attend a religious service regularly later in life if they grew up in an intact family rather than as a child of divorce.

Social Development of Children of Divorce 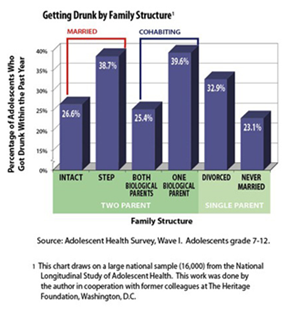 This next chart measures the percentage of adolescents who have gotten drunk in the last year based on family structure. For children from intact married families (biological parents), roughly 26.6% have gotten drunk in the last year. For children of divorce, the rate increases to 32.9%. Children living in step families checked in at an even higher percentage at 38.7% again refuting the idea of many parents that remarrying somehow replaces the family that children lost in the divorce.

By far, the group that checked in with the highest percentage was those children who biological parent was cohabiting with an unmarried partner. A full 39.6% (almost 2 in every 5) of adolescents in that category have gotten drunk in the last year. 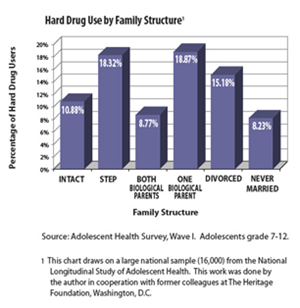 Hard Drug Use and Family Structure

The results for drug use among adolescents is very similar to the results for drinking. For adolescents from intact families, nearly 11% are hard drug users. For children of divorce, that figure rises to 15.18% almost 50% higher. The percentage raises even higher still for children living in a step family (18.32%) and children with one biological parent (18.87%).

Repeating a Grade by Family Structure 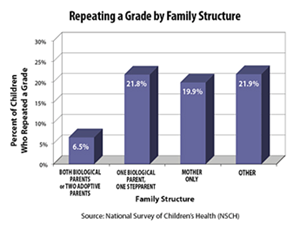 Divorce has also been correlated to decreased school performance. This charts confirms that notion. For children from intact families, only 6.5% of children in this study repeated a grade. For children living only with their mother, that rate more than triples to 19.9%. Children living in step families also saw a significantly higher instance of repeating grades at 21.8%.

Likelihood of Divorce as Adults 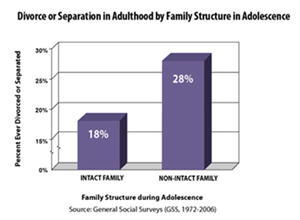 There has been much debate about the intergenerational impact of divorce on children. This chart from the Mapping America project shows that children from intact families are 18% likely to have ever been divorced or separated. By contrast, for children from non-intact families, 28% have been separated or divorced. That is an increase of over 50%.