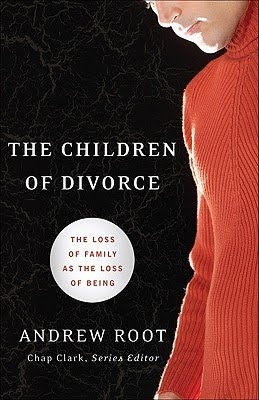 In his book, The Children of Divorce: The Loss of Family as a Loss of Being, Andrew Root writes:

It is my belief that our humanity (and very being) is upheld in community. for each one of us, the most significant and core of these communities is the one mad up of a biological mother and father. Witout their community, their would be no child. So when that community is destroyed, it is a threat to the child’s being. Divorce, therefore, should be seen as OT just the slit of a social unit, but the break of the community in which the child’s identity sts. Divorce is much more than a psychological or sociological reality. It is about something deeper than economic advantage, psychological stability, or social capital. Divorce is a threat to a child’s very ontology, to his or her very being…when the community that rated a child dissolves, the child is left exposed not only psychologically and socially, but ontologically.

It the remainder of the book, he skillfully and convincingly argues that the reason so many people underestimate the impact of divorce of children is because they do not realize the ontological impacts of divorce. Ontology is the branch of metaphysics that deals with the study of the nature of existence or being. In other words, Root shows how divorce not only impacts a child emotionally and socially, but at the very core, divorce causes children to question their very sense of being. after all, if the two people who created a child are no longer together, and the community they spent their first years in no longer exists, why do they exist?

Root explains how, as children, we draw our sense of being primarily from the family we are a part of. When that family is torn apart, the child not only must adjust to the many changes that divorce brings but also wrestle with why they even exist. The book is a “deep read,” but I do recommend it for anyone who knows or works with children. If you work with any number of kids, statistics show that you likely work with some whose parents have divorced. This book will help you to understand what they are going through.

My point today, though, is not simply to recommend this book, though I do so whole-heartedly. My point is to speak to the church as a whole. As members of God’s family, we become a part of a new community, a new fellowship of believers who have been adopted by God as His sons and daughters. Why then are we not, as the community of Christ, reaching out to these kids who have lost the very community to which they tie their being and offing them a new community. A community is Christ which does not define them by the choices of their parents, but instead defines them by a new relationship with Christ who can heel all their wounds. We, as the church, have something to offer them that no one else can. Through faith in the completed work of Jesus Christ, we stand able to offer them adoption into an eternal family – a family which will never dissolve with a Father who will never leave them and never forsake them. We can offer them the source of true healing and lasting joy. We stand able, and indeed commanded, to offer them the one thing they need more than anything else. What is your church doing, and what are you doing, to reach out to these kids to help replace their lost identity with a new identity in Christ?