One widely held view, and oft cited statistic in our country, is that one-half of all marriages end in divorce. While there is some debate about the origin of this statistics, it is generally true, and a swing of 2-3 percent in either direction does not mitigate the overwhelming impact divorce has had on our nation and our children. In order to set the record straight and present a clear picture of divorce in the United States, I have gathered some often cited measures of divorce (we will look at divorce as it affects children in a later article). Have a look at these statistics and consider what they mean for our nation and for the children of our nation. 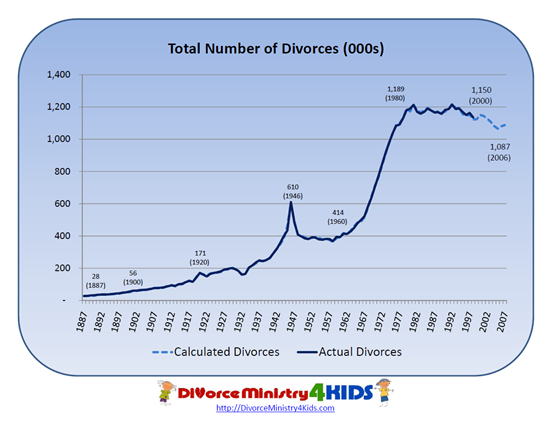 It should be noted that through 1996, total divorces were reported by the Federal Government. After that time, they ceased to publish those numbers. We have estimated the number of divorces based on the ratio of marriages to divorces. You will note that the calculation never deviates significantly from the actual reported amounts evidenced by the fact that you can barely notice the dotted line in the graph. 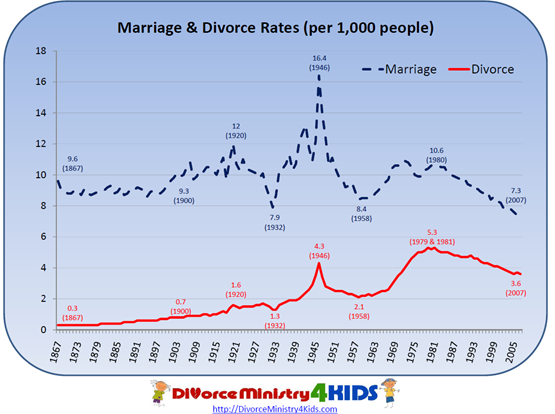 The total number of divorces gives us a good raw number, but it is important to look at rates because the raw numbers are also influenced by increases in population as a whole.

This chart presents what is called the crude rate of marriages and divorces (number per 1,000 total population). You will note that for divorces, the chart roughly equates to the first chart. In 1867, there were 0.3 divorces for every 1,000 people in the country. In 1932, the rate was still only 1.3 per thousand. The rate spiked at 4.3 following World War II then dropped to 2.1 just prior to the 1960’s in 1958. The highest rates were recorded in 1979 and 1981 when the level reached 5.3 per thousand people. That rate has actually fallen, due primarily to changes in marital patterns like waiting longer to marry and cohabitation, and stood at 3.6 in 2007.

Divorces per 1,000 Married Women 15 Years of Age and Older 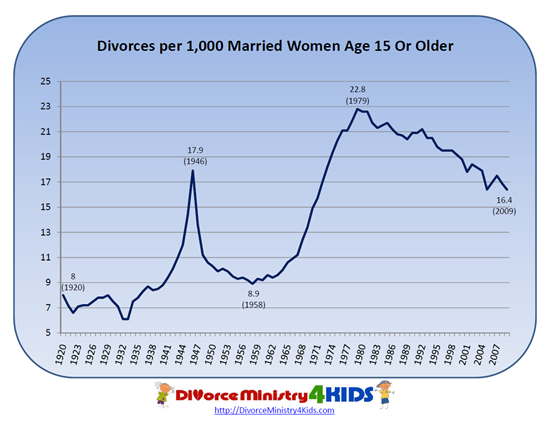 The crude divorce rate is a good measure, and allows the statistics to be easily compared to other nations (see the last chart below), but it does not represent the ideal divorce rate. In this chart, we look at the rate of divorces amongst those people who are actually married (women age 15 or older).

Like the other decreases, the decrease in recent years is related to changes in marital habits including cohabitation. Dissolution of cohabiting relationships is not included in these statistics. 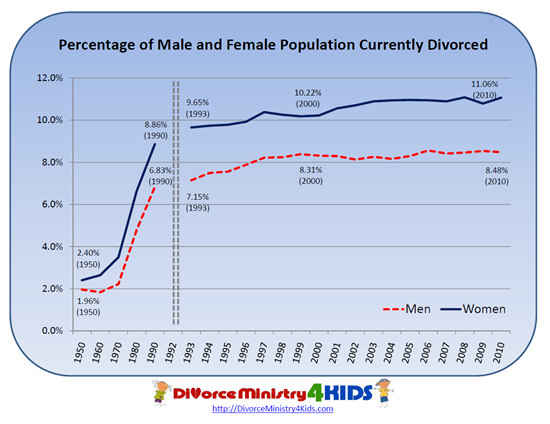 Another measure used to quantify the extent of divorce in our country is the percentage of men and women who are currently divorced. Like the last chart this is a measure of men or women 15 years of age and older.

Comparison of U.S. Divorce Rate to Other Countries 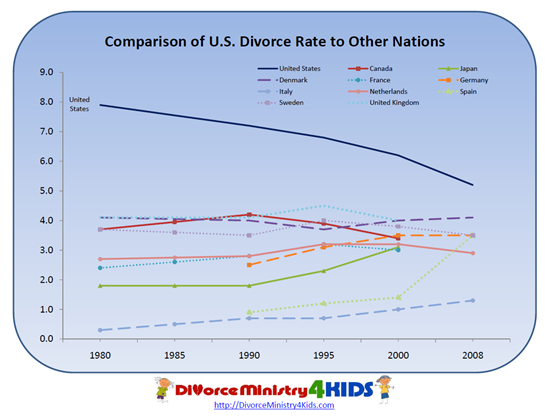 As a nation, we pride ourselves on leading the world in many regards. This chart reveals one area where we should not be so proud. Although the data is limited in time (only since 1980), this chart shows that the United States has consistently led the world when it comes to the divorce rate measured as number of divorces per 1,000 people aged 15-64.