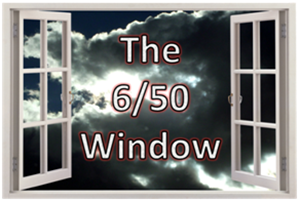 Earlier this week, we introduced the 6/50 Window as the newest mission field of the Church. The 6/50 Window is a symbol for the number of children of divorce who eventually end up as born again Christians with a biblical worldview (6%) as compared to the total number of children who will witness the dissolution of their parents’ marriage/relationship. This is a mission field which the church must recognize and do something about. As the church we must stand in the gap for these kids, acting as the hands and feet of Jesus Christ and providing practically for the needs of them and their families. Ultimately, our hope is that they will find hope and healing in a personal relationship with Jesus Christ. In future articles, we will examine how divorce and parental breakup affects a child’s spiritual life, but before we do, it is important to establish why this is such a dire need. In other words, is the church already meeting the needs of children of divorce and their families? As stated in previous articles, at Divorce Ministry 4 Kids, we define the term “children of divorce” to include children born to single parents and those whose parents were cohabiting at the time of their birth and subsequently dissolved their relationship. So, how has the church done in ministering to these kids and their families?

We turn first to the groundbreaking study done by Elizabeth Marquardt and discussed in her book Between Two Worlds. She reports in that book that:

“In perhaps the most poignant finding of the study, of those young adults who were regularly attending a church or synagogue at the time of their parents’ divorce, two-thirds say that no one—neither from the clergy nor from the congregation—reached out to them during that critical time in their lives, while only one-quarter remember either a member of the clergy or a person from the congregation doing so.” 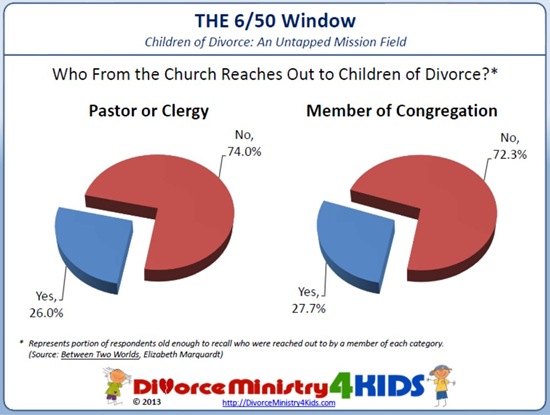 The numbers reflected in the chart above exclude those who responded that they didn’t know or were too young to remember.

At Divorce Ministry 4 Kids, one of things we have strived to do is hear from children of divorce about their own experiences. To that end, we started a survey of grown children of divorce before the ministry even officially started. That eight question confidential survey can be found at https://divorceministry4kids.com/divorce/, and we are still accepting responses today. However, we aggregated the data as of October 5, 2012 in order to have a look at the preliminary results.

One of the eight questions we asked was:

“When you were going through your parents’ divorce, did you have someone other than your parents to talk to about it?”

When we compiled our preliminary results, we found that about 23% of respondents indicated that a family member (grandparent, aunt or uncle or some combination thereof) was there for them. However, for purposes of this chart, we eliminated any responses where the respondent referred only to a family member as support. While family members can be a significant and essential line of support for these children when dealing with their parents’ divorce, our focus was on support from those outside the family. Additionally, while family members can offer a significant source of support, many times they come with inherent biases and don’t offer the child an impartial party but one who favors the view of one parent or the other.

Based on our survey, a full 82% of respondents indicated that they did not have anyone outside of their parents or other family members to talk to about the divorce, and only 7% indicated that anyone from the church reached out to them. These results are likely lower than those presented by Ms. Marquardt because we did not limit our population to only those children who were regularly attending church. Nonetheless, it is a striking condemnation of the efforts of the church to reach out to these kids. 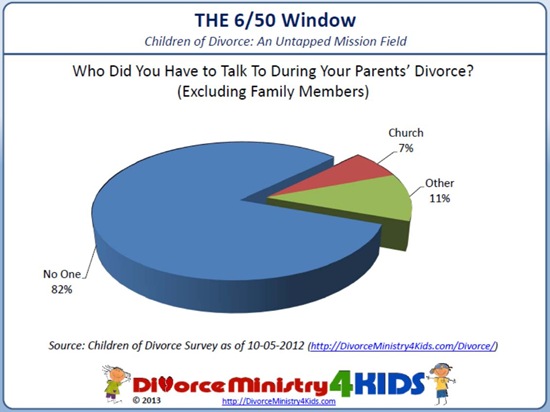 One of the principal goals of our study was to give a voice to children of divorce, and it seems appropriate to include in this article some of the many actual responses we received from the children of divorce who answered our survey. The names have been changed to maintain confidentiality. The numbers following the name represent age at the time of the divorce and age at the time the respondent filled out our survey:

“Not at the church I attended. They didn’t get involved in people’s lives. You didn’t really know anyone except your own friends or school mates.” (Sarah, 14, 52)

“…we lived in a very rural area and there wasn’t a church bus to pick us up, and I guess the folks we went to church with didn’t consider coming to get us either.” (Bailey, 14, 35)

“We were kicked out of the church I had gone to my whole life because they were getting a divorce. I was too young to notice any judgment, but I do still miss that church and the people in it, although they have probably forgotten me.” (Maria, 10, 19)

It is time for the church to step up and stand in the gap for these kids. It should be our mission to make sure that never again does a child have to answer “No” to the question, “Did anyone from the church reach out to you during your parents’ divorce?”