Some of the very first articles published on DivorceMinistry4Kids.com included statistics on marriage and divorce and the impact on children. Over the years we have featured a number of articles including more detailed statistics related to the impacts of divorce and child living arrangements. This past November 2013, we presented a workshop at the Engage Conference in Mechanicsburg Pennsylvania entitled “This Ain’t Your Grandmas’ Children’s Ministry: Understanding Modern Families.” The premise of the workshop was that in order to understand the kids who come into your churches every Sunday morning, you need to understand how their families are changed. We gathered a lot more information than we were able to share in a one hour workshop, and over the next couple of months we will share a variety of statistics and study results related to children and the types of families they live in. Our sincere hope is that, armed with this information, the perception of the children in your ministry will change and you will be better able to minister to children from today’s diverse modern families.

This week, we are going to look at various charts and statistics related to marriage and divorce. You may be surprised by the current trends. 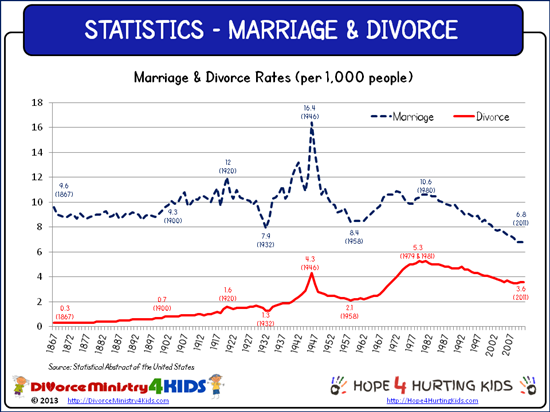 As you can see from this first chart the marriage and divorce rate in the United States has been decreasing about 1980. In 1979 and 1981, the divorce rate in the United States peaked at 5.3 divorces per 1,000 people. In 2011, the rate was 3.6 per 1,000 people (a decrease of over 30%). This is due in large part to the associated decrease in marriage rates and the increase in cohabitations (which dissolve at a much higher rate than marriages). This measure is known as the crude divorce rate. 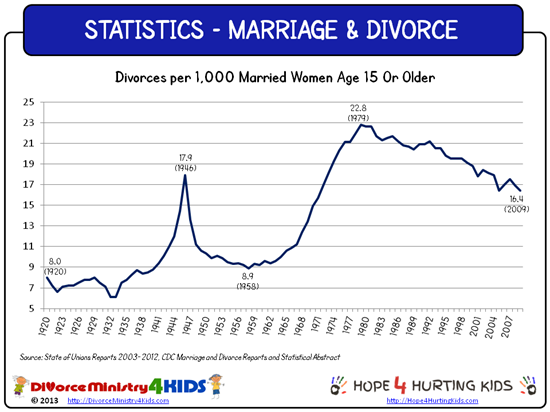 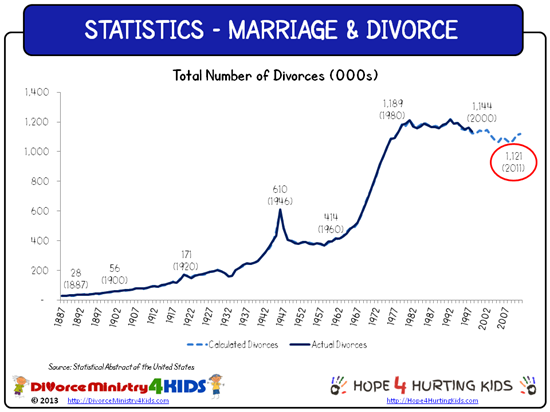 This estimation is necessary because some states opted to no longer report annual numbers of divorces to the federal government beginning in 1996. In 1974, the United States officially switched to having more marriage end in divorce than ended by the death of one of a husband or wife. The number of divorces has been over 1 million each year since 1975. Lest you lull yourself into thinking this is a problem only outside the church, the divorce rate of evangelical and born-again adults is statistically equivalent to that of non born-again adults. 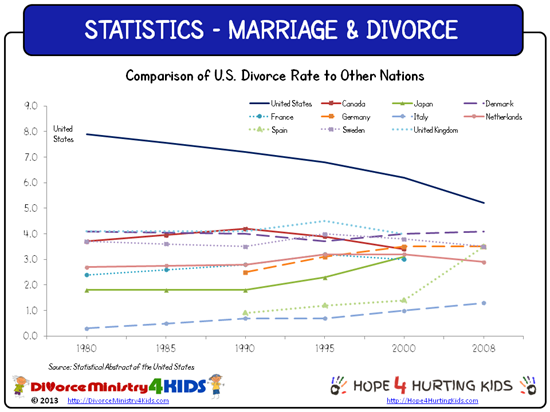 In the United States, we tend to pride ourselves on being a world leader on a variety of fronts. Unfortunately, divorce is amongst those things the U.S. consistently leads the world in. In fact, the U.S. leads this tragic race by a convincing margin. The rates quoted in this chart represent the number of divorces per 1,000 people aged 15 to 64. The U.S. also leads the developed world in the percentage of women (about 10%) who have had 3 or more marriages, divorces or cohabiting relationships by the age of 35. The next closest nation is Sweden at 4.5%. 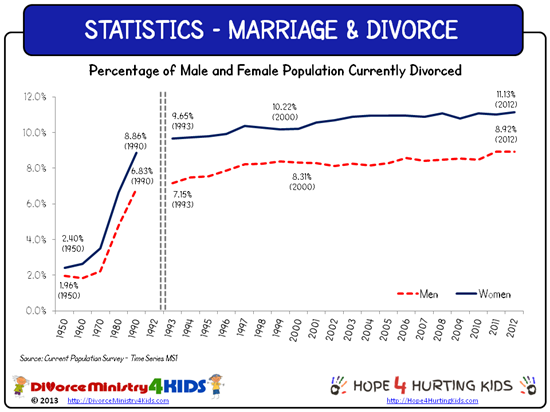 Turning from rates of divorce to the percentage of the population currently divorced. This chart shows that approximately 10% of the total population of the United States was divorced in 2012 (11.13% of all women and 8.92% of all men). This represents a significant increase since 1980 when 6.64% of women and 4.8% of men were divorced.

This only represents the percentage of the population currently divorced. Given the rate of remarriage this is not an accurate representation of the number of people who have ever been divorced. For that we turn to another chart. 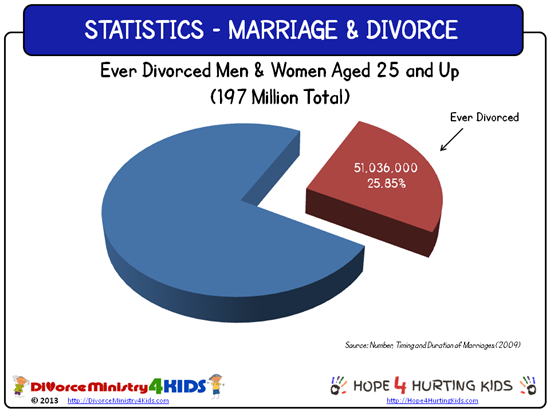 In 2009, there were about 197 million men and women in the United States aged 20 and up. Of those, about 51 million had ever been divorced. Approximately 26%. That means, that one in every four people you meet over the age of 24 has been a participant in a divorce. Add in the number who have lived with someone outside of marriage and had that relationship dissolve, and the number is likely much much higher. 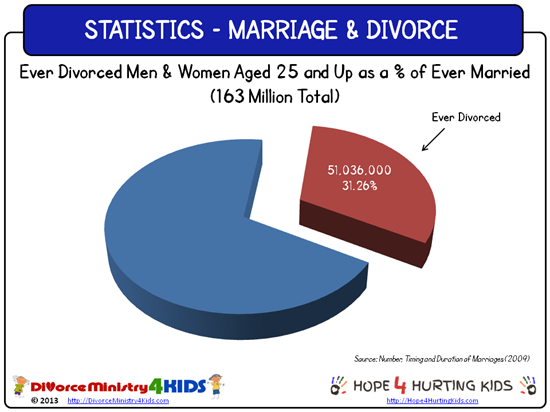 You may be familiar with the widely cited statistics that 50% of marriages end in divorce and be wondering how that can be true if only 31% of all people who have ever been married have also been divorced. Although there is much discussion about whether or not the oft cited 50% figure is accurate, given that divorce rates for second and third marriages are even higher than those for first marriages and that many divorcees are likely to remarry, it seems likely that it is an accurate overall measure.