Last week, we began a new series called “A New Way of Looking at the Spiritual Impact of Divorce on Children.”  In that series, we started looking at a new report from Melinda Lundquist Denton of Clemson University titled, “Family Structure, Family Disruption, and Profiles of Adolescent Religiosity.”  Last week, based on this study, we talked about how divorce impacts a child’s spiritual development.  Today, we will look at a new typology used in the report when thinking about children of divorce (or anyone else) when it comes to their faith and religious practice.  On Wednesday we will look at the results from the study based on this new typology.  Come back Wednesday as well for a free downloadable pdf file which contains all three parts of this series. In order to test the spiritual impacts of divorce on Kids, Denton first sets forth a framework that acknowledges that when it comes to religion, teens (and people in general) fall much more along a spectrum than they do in one or two groups. So, she proposes that we think of religious adherence and spirituality along a spectrum which includes five distinct points known as the Five “A’s.” Each of these A’s represents one point on the spectrum, and teens for purposes of this study were grouped into one of five categories:

Respondents were classified into each category based on their responses to multiple questions in the areas of:

The classifications are presented in the chart below: 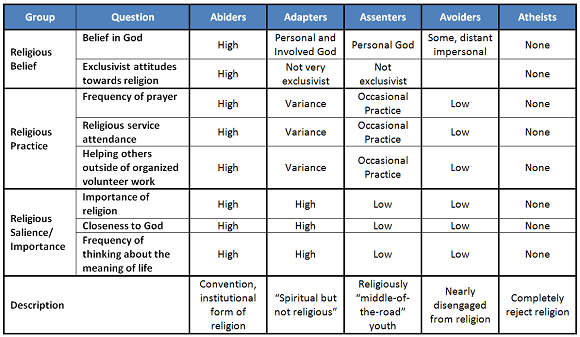